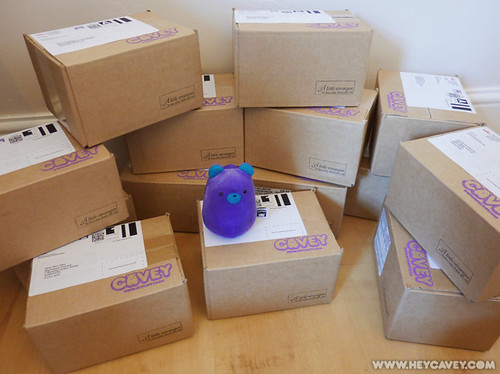 Wow Caveys release day was mental! He officially went on sale at 8:30am GMT, i woke up to find an email from Lauren saying that the A Little Stranger shop had died, it had gotten so much traffic it had crashed! So i decided to take orders manually by email (people in America had waited up half the night to buy one, wow!) and within half an hour all 20 had sold! They were paid for, packed up and sent by lunchtime so me and Jonjo went to the zoo! This picture isn’t even of all the boxes, they’re still being packed at this point, how mean am i – messing about taking Cavey pictures while Jonjo does the packing-up!

Bigest of thank you’d to everyone who made the launch such a smashing sucess! And hugs and kisses to everyone who stayed up late to order theirs, i am the happiest bunny in the world! New Caveys announced soon! www.heycavey.com

One Response to “Cavey release”