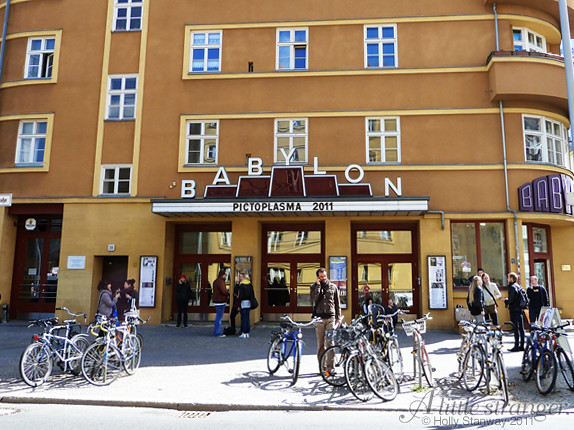 We treated ourselves to a long weekend away last week for the bi-annual Pictoplasma character design, art and animation festival in Berlin. I must’ve taken 237459643875463 pictures, and had a real struggle to pare them down to what you see here – the festival was fantastic! It was my first time going to Pictoplasma and I wasn’t quite sure what to expect, and if you’ve never been i would definitely recommend it. It gave me the same kind of vibe as being back at uni, all day there were lectures and film screenings, then at night parties and DJ’s playing. Rosa Luxembourg Platz was transformed into a Character Walk, following a map you can walk around the city discovering little galleries with beautiful exhibitions on by established and upcoming artists. The festival came at a time when i’m feeling pretty burnt out from work and the long weekend of arty friendy lovliness was much needed, I came home feeling totally inspired.

I had my tarot cards read (Which was, um, fun but slightly scary!) drank green beer, danced with a Yeti on stage, fell in love with Mochimochi knitted adorableness, watched the funniest film i’ve ever seen, went to an art exhibition/gig in a squat, had a great time with my friends and made some new ones :) 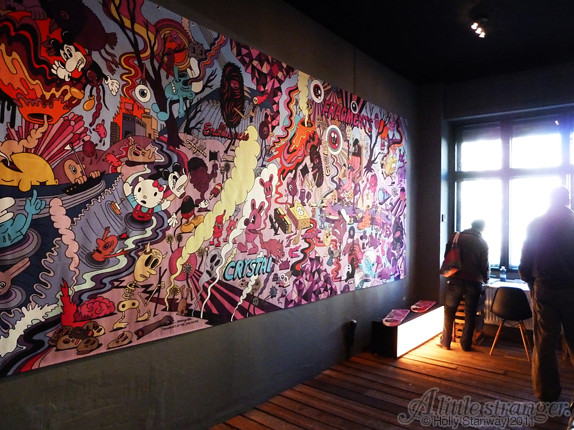 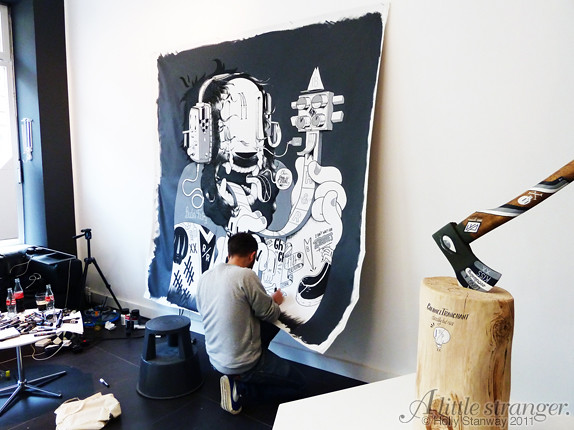 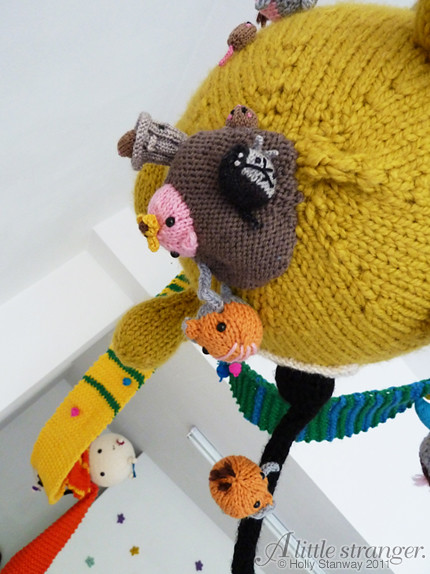 MochiMochi Land. I took so many pictures of this exhibition, Anna had suspended knitted planets from the ceiling so you were walking around a kawaii solar system. Depressingly (but not unsurprisingly) all her pieces were already sold when we got there. Anna’s knitting talent makes me sick with envy. Just kidding, i’m her new biggest fan! :D 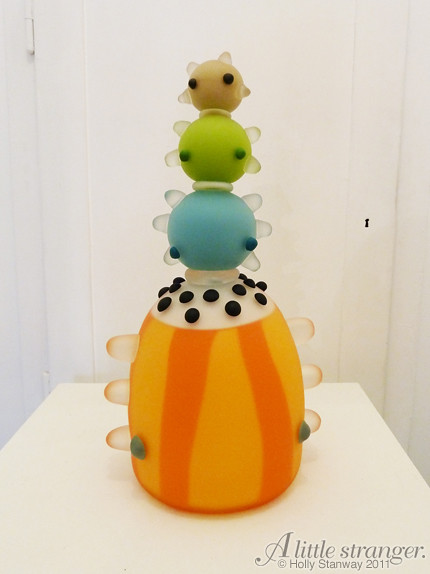 Bee Kingdom.Blown glass sculptures. I’ve been saying for years that I’d love to do glass blowing, and maybe one day I’ll get on the case of having some classes. These glass sculptures were just gorgeous and captured the light so beautifully.

Video: A small frightened robot hiding in a cardboard box by Tordal, and Beatbot by Beatbots. Both of which were completely adorable, i love robots!  The Beatbot i had seen online before and didnt imagine he would be so big in real life, the way he moved made him seem really alive. The Beatbot could be controlled by sound, or by a wii remote which was pretty fun to have a go on and made the little guy spin around, wheeeeeee! 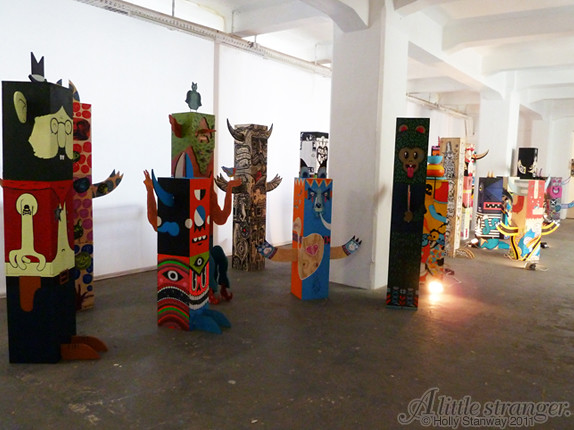 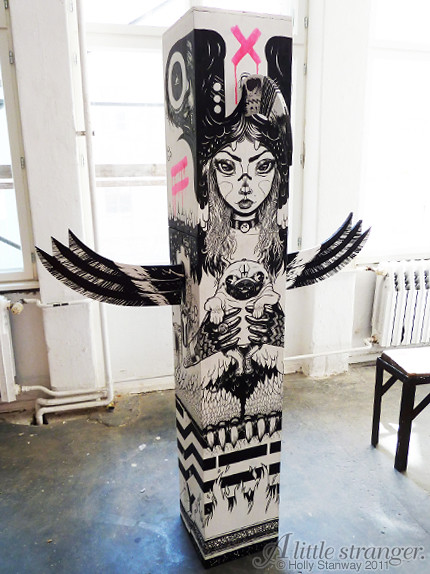 Character Totem (InkyGoodness). An art collective that celebrates and brings to the spotlight emerging talent in the creative scene. Each artists decorated a blank totem, and they all went on display together in Berlin. Another exhibition where i took a bazillion photos. 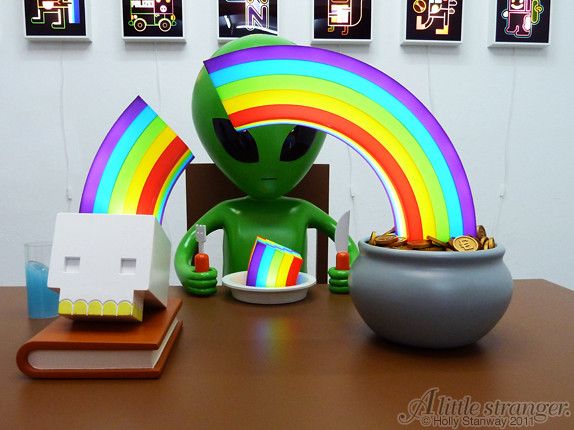 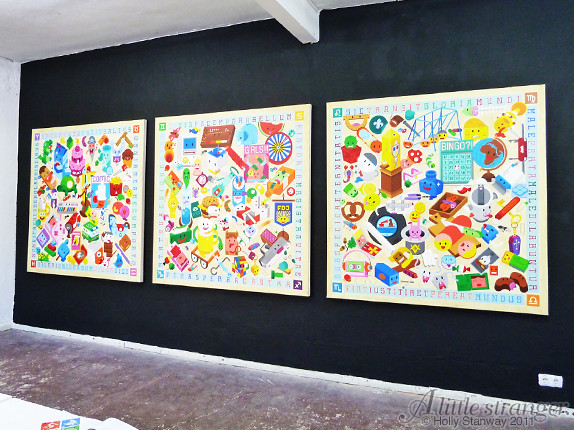 Doppeldenk. I applied for the Pictoplasma residency this year and was a bit gutted that i didn’t get it, and now i see who they picked i can see why – Doppeldenk’s exhibit smashed it. You walked in to a room of UV posters light by a blacklight, the second room had these giant painting (i want one in my house so bad!) and at the end was a life size statue of a bright green alien eating a light up rainbow. 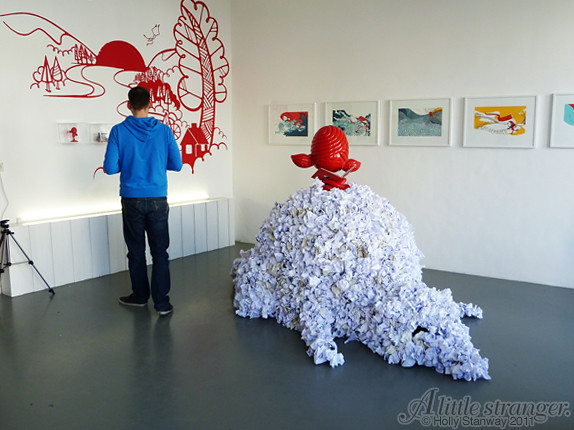 Her Idea. Beautiful artwork by Rilla Alexander. I really loved the sleeping bear sculpture made out of scrunched up paper. Plus, she’s adorable. Rilla has herself a new fan! 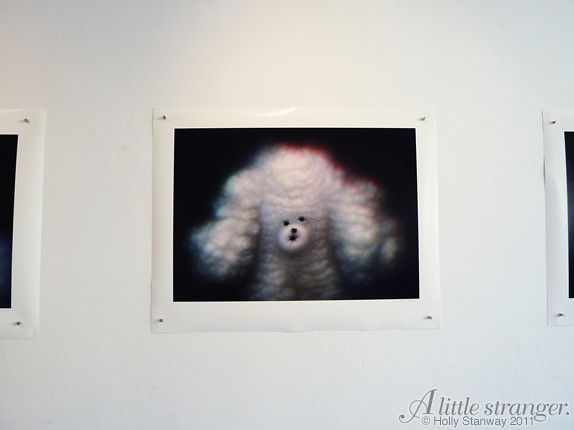 Canis Mortuus Familiaris by Jeremy Dower. Hands down the creepiest exhibition we saw. He gave a really interesting lecture where he described the idea behind the work as ‘what happens to a character once they die?’. The images are of characters who are in a transition state as the pass into non-existence. Most surprisingly he explained his work is not done using 3D software, these are digitally illustrated pieces. Amazing. 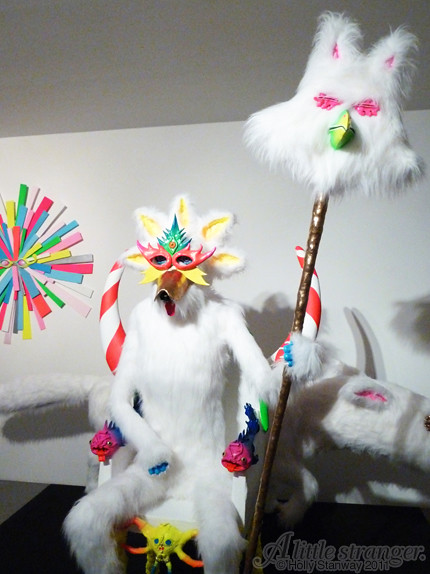 3 Moments in the Life of Kaluk by Ben and Julia. Insane french artists. I loved their lecture and thought their video pieces were wonderful. If i’m totally honest i didn’t dig their exhibit nearly as much as their video’s. 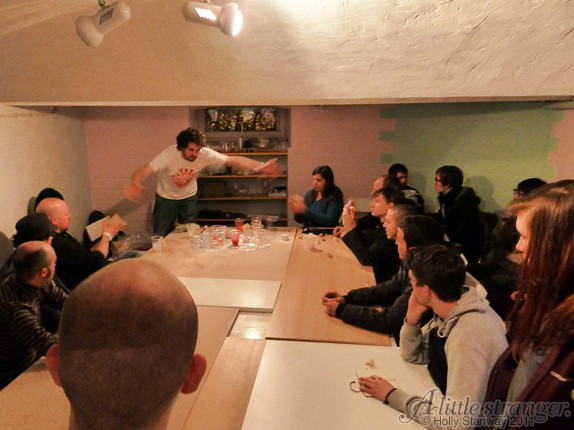 Matt JOnes’ Plastic Surgery workshop. Matt took two classes over the weekend, teaching silicone mould making and resin classes. We turned up at the end to have a nosey (and round up everyone for the pub!) and caught Jonesy doing this pretty epic Jesus impression ;) Pictures of Matts Mini Tea exhibition soon! 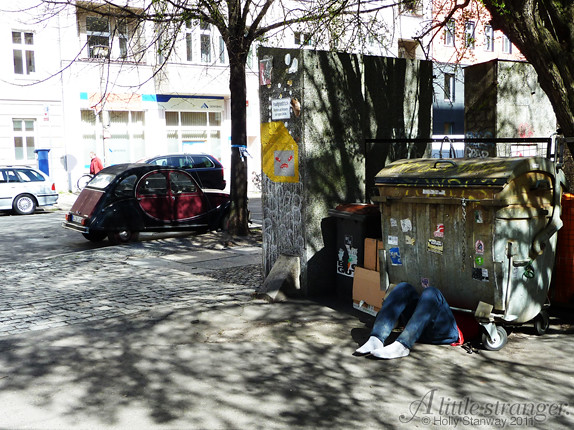 Mark Jenkins. Mark places clothed human dummies in unexpected places, photographing peoples reactions. These looked so real, there were no exhibition signs up, of course, so i did a proper double-take before realizing this was the exhibition. Good job Mark, you got me! 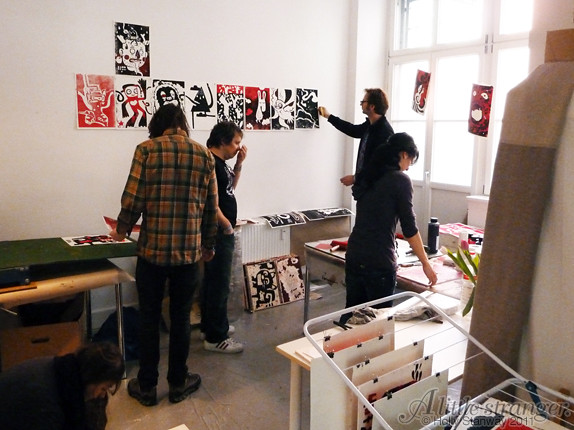 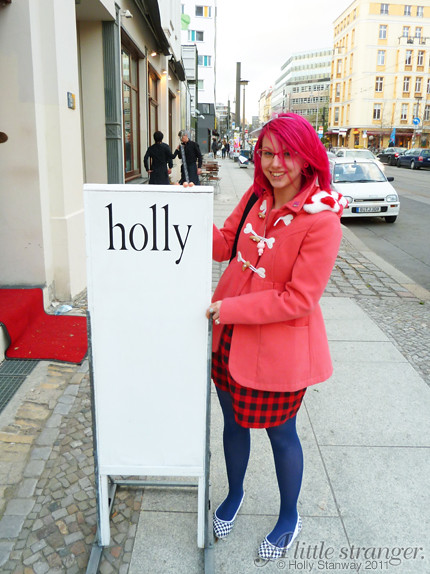 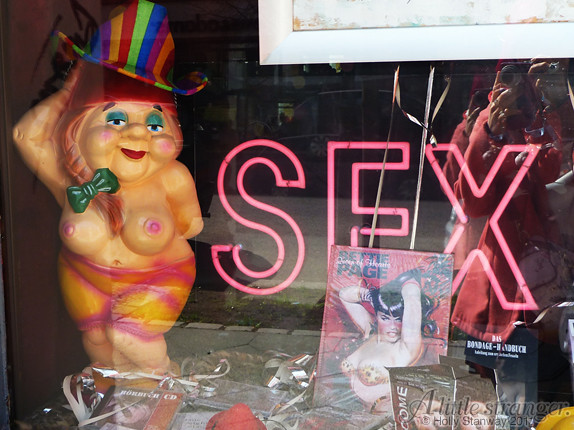 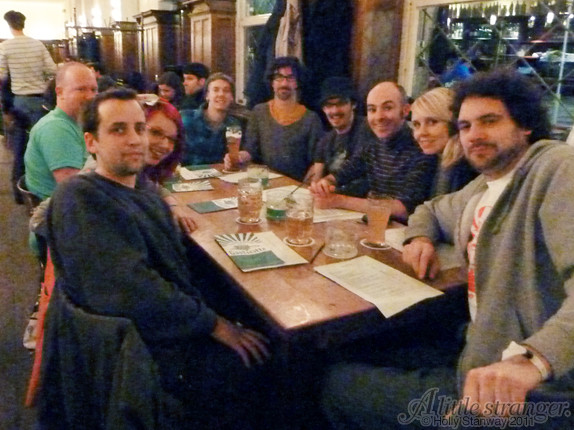 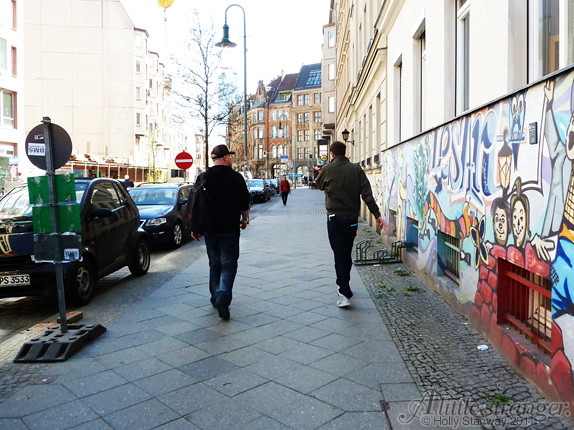 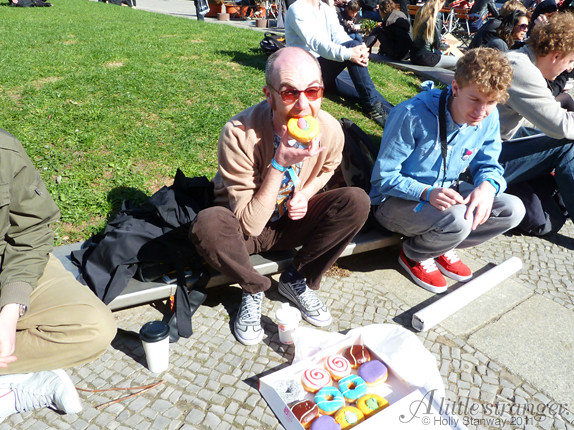 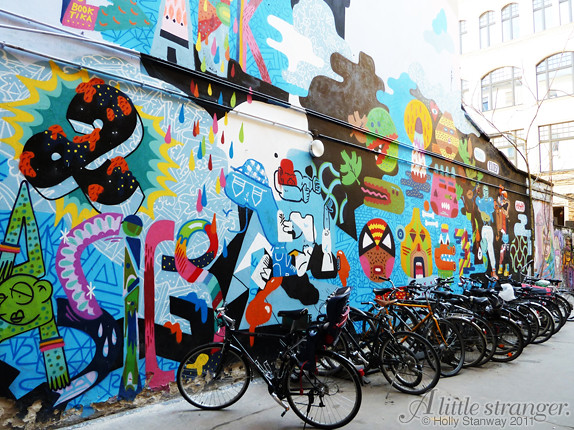 This pretty much sums up Berlin; colourful graff and bikes everywhere! 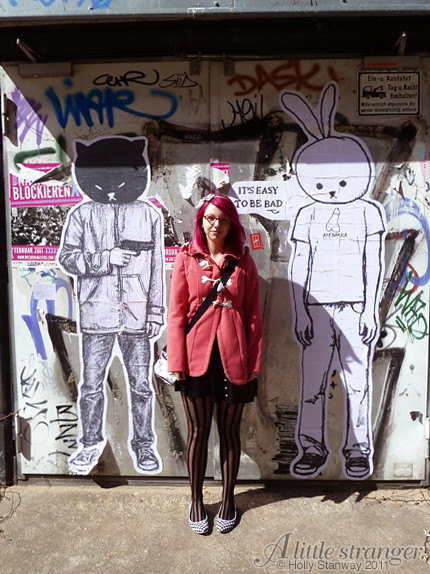 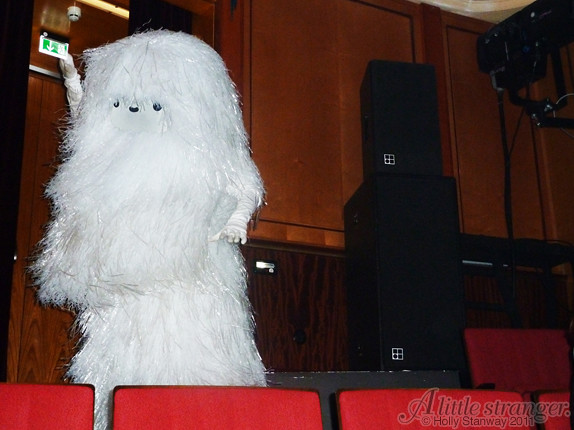 The Missing Link Show. On the last night there was a huge show in the big second exhibition hall, featuring music, yeti’s, a VDJ, and more yetis’. I was a bit unimpressed at the first half of the show, but the second half blew my socks off. Disco dancing Yetis (who came up into the crowd) and the audience got invited up onstage to dance, run around and play games. Pure joyous fun, it was like being a little kid again. I was so excited about running up on stage i didn’t take my camera, but I’ve been promised a video of me in the dance competition, and of all of us cuddling the yeti’s :D 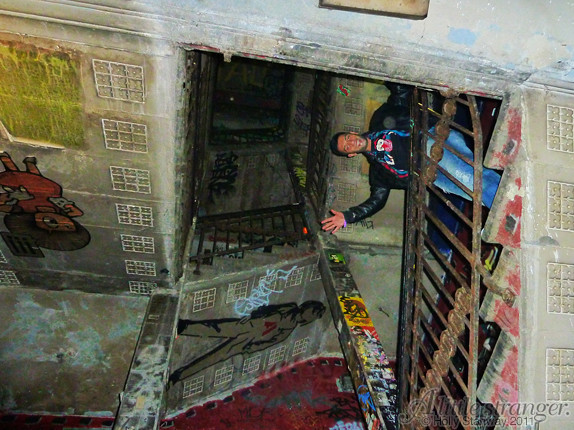 After the missing link party a gang of us headed to an art exhibition/gig/market in a squat. Every inch of the place was covered in graffiti, with a band playing outside around a bonfire, a floor or art, then go up a couple more stories and there were bands playing. Completely surreal and really really fun. You just don’t get shit like this in England

A few more picture on the Cavey blog; Check out what Cavey got up to in Berlin.