Christmas Eve at midnight marked the secret release of the Dune Sea II Nibblers over on The Tarantulas webshop. This figure was a a collab between Onell Design x Real x Head x A Little Stranger x The Tarantulas. Vinyl figure made in Japan by Real x Head. Their little cloaks are handmade in the UK by yours truly.

Stay tuned for a special A Little Stranger colourway, available exclusively through the A Little Stranger shop at the end of January. This morning the postman brought a big box of goodies from Chris for a photo shoot, man am i excited about this release! More news soon 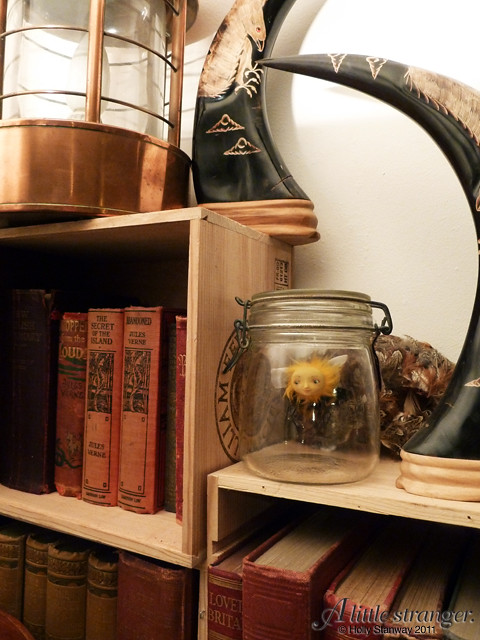 Bee-Girl in a jar was a private commission and is sold. She is an A Little Stranger original, made from scratch with polymer clay, glass eyes, faux fur and wire, suspended in an antique jar. I have a few more of these beautiful antique jars waiting for little creatures to go inside; working on a smaller face sculpt was fun and had left me eager to explore just how small i can go with these… 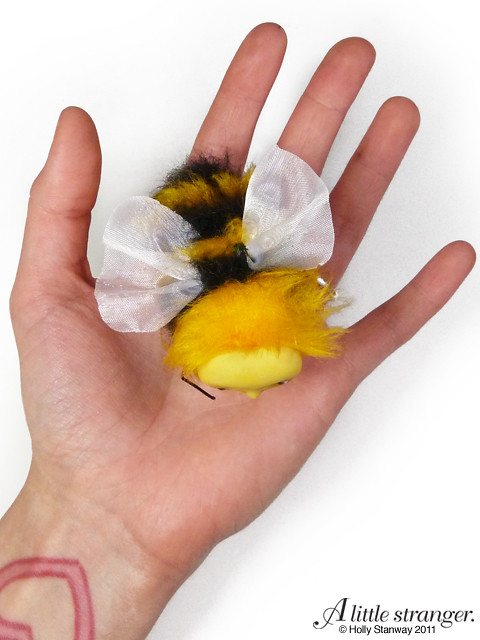 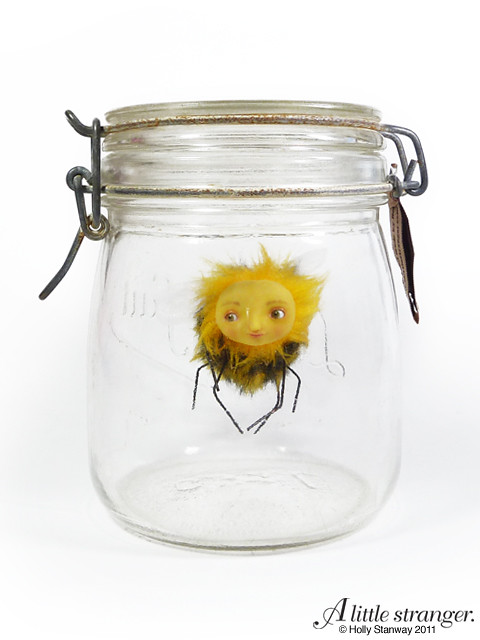 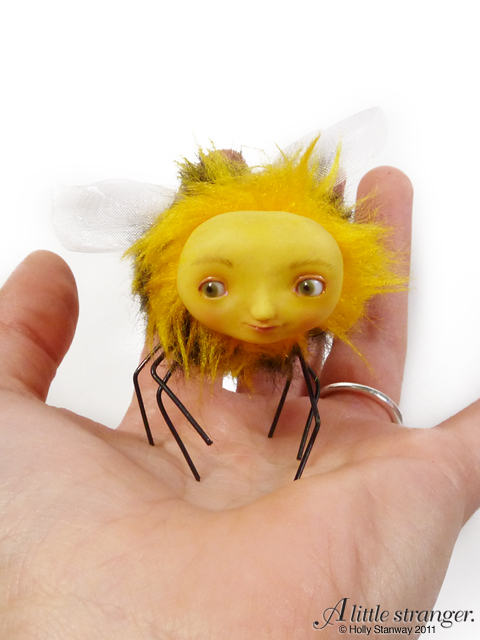 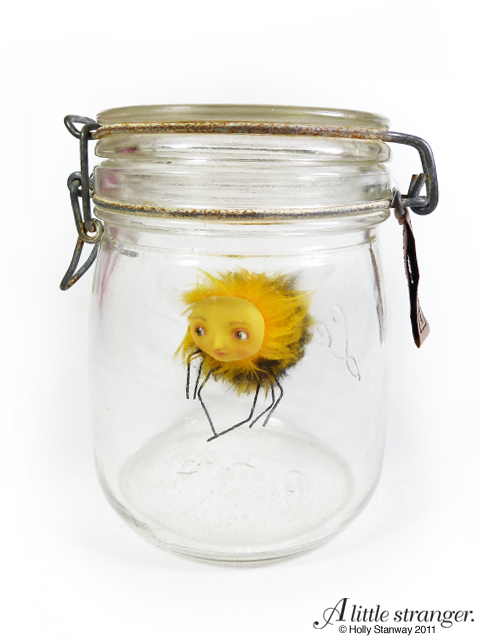 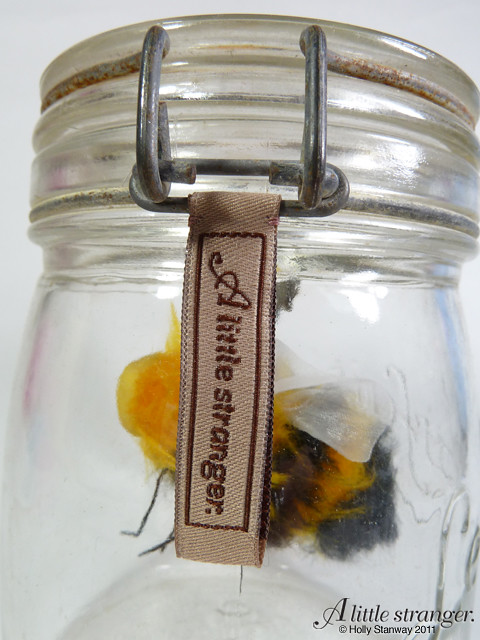 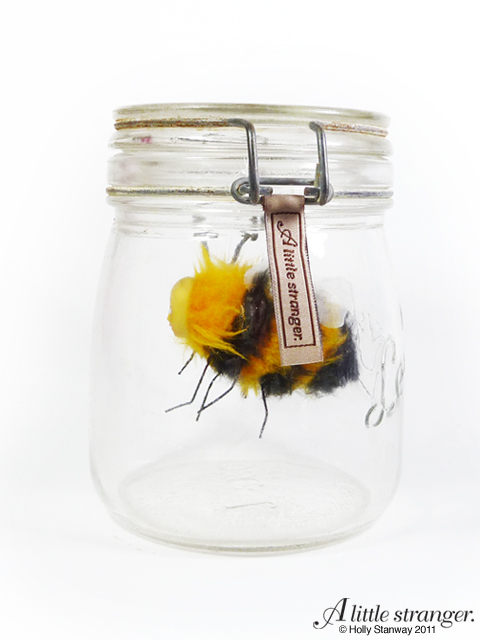 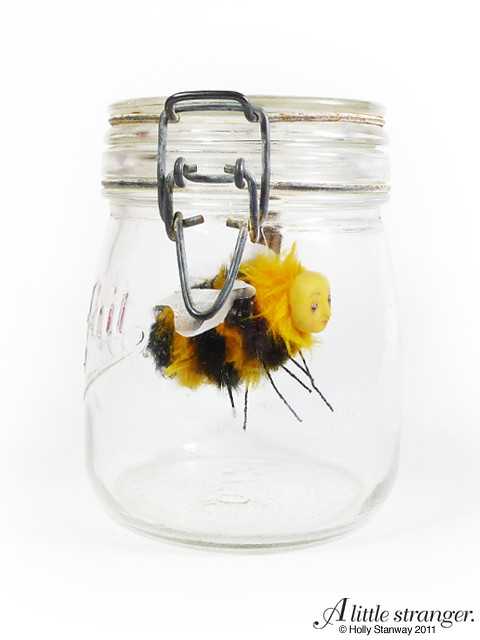 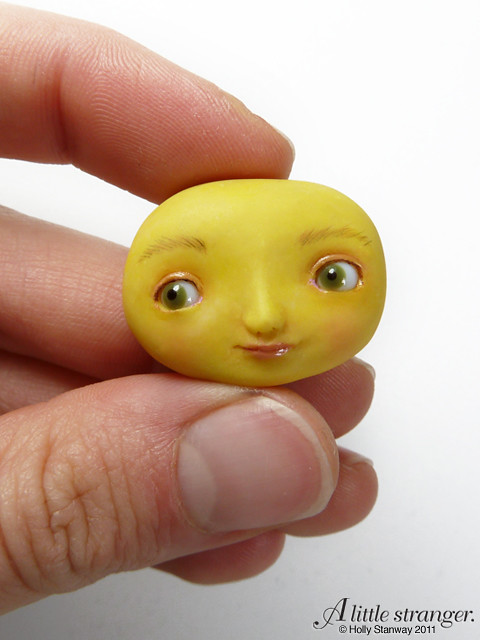 New Customs and Bunny Brooches in the Shop

Phew! It’s been a crazy few months which has left my online shop a little neglected as things seem to fly out of shows before i can get them up online. So i’ve been putting my free time over Christmas to good use and updated the A Little Stranger Shop.

A great big sort out of all my stock following all the live events and custom shows i’ve done this year has left me with two customs and half a dozen Bunny Brooches to add to the shop! Visit alittlestranger.bigcartel.com for a browse. 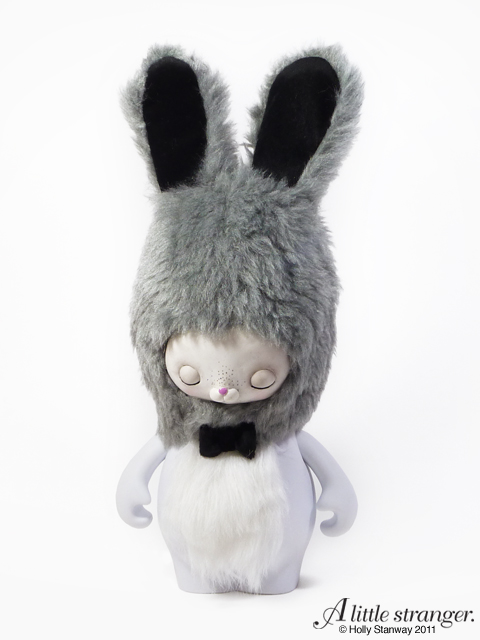 Grey Fancy Snow Bunny follows on from my custom 11″ Eeerz The Fancy Snow bunny, for the Eeerz Invasion Tour at Forbidden Planet. He started life as one of the Eeerz white DIY vinyls, onto which i sculpted his face with polymer clay and painted it with acrylics and pastels, and added ‘fluff’ lines to his body. I made his fluffy head and ‘eeerz’ from soft grey faux fur and off-white velvet. Lastly i made him a little black velvet bow tie and fluffy white tail.

Grey Fancy Snow Bunny was a private commission and is now sold. 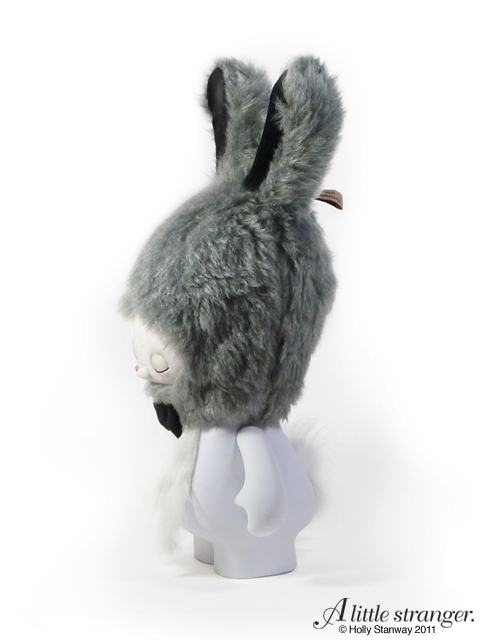 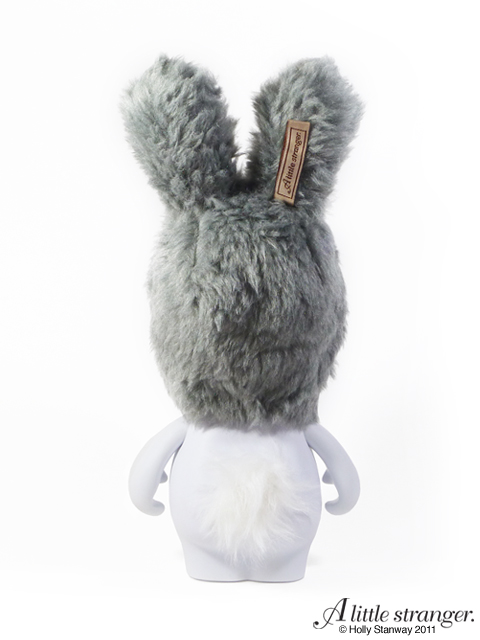 Imagine if our favourite Japanese characters were real and lived among us? Taxiderm-eevee is a piece of rogue taxidermy, exploring what it would be like if my favourite Pokemon, Eevee, were a real animal that had been captured and preserved for future generations. Imagine what we could learn from this fascinating creature!

Taxiderm-eevee is an original work created for the Beware the Tall Grass show, November 18th at Kidrobot, London. He sold on the night.

Fancy Snow Bunny is a custom 11″ Eeerz for the Eeerz Custom Invasion Tour launch party at Forbidden Planet, London. He started life as one of the Eeerz white DIY vinyls, onto which i sculpted his face with polymer clay and painted it with acrylics and pastels, and added ‘fluff’ lines to his body. I made his fluffy head and ‘eeerz’ from white faux fur and velvet, trimmed to give a graduated look. Lastly i made him a little bow tie and tail

All the customs are on display now at Forbidden Planet London and has some beautiful customs up on display.

HodgePodge was created for the Tales from the Sneaky Crypt show at Kidrobot London, and sold on the night. The show was around Halloween time and featured a spooky theme, with each artist creating a creature that could be found in the ‘sneaky crypt’ Part cat, part grub, part fluff i-don-know-what-he-is, HodgePodge is made from fleece, felt and different colours  and textures of faux fur, stitched together to create his dappled coat. His face cast from an original sculpt by me, in translucent resin, and painted with acrylics before being sealed with a matt laquer. HodgePodge has poseable feet and little wiggly grub arms.